This is the general recipe of my curry.

I don’t actually refer to a recipe when I make it, and I vary things a lot depending on what I want to put in it, how much time I have, how I feel about it, etc. So this is my attempt at describing a “flexible” recipe, that can be used to make curry in a similar manner, but isn’t a list of steps.

As such, there’s no ingredient list up-front, and no precise cooking/preparation times. Read through it all once, then make your own!

That’s not necessarily actual meat. It’s the main ingredient. It can be a vegetable. The only time this section doesn’t apply is when doing egg curry, but you’ll need a different recipe for that.

If using a vegetable, I usually go with long-to-cook stuff. Pumpkin, courgette, all manners of squash, sometimes even potato and other tubers although these need longer cook times so be aware.

Optionally fry for a few minutes, then remove.

In a pan, brown both sides about 3 minutes each. If you have a good non-stick pan or wok, you can put it straight in, without adding oil — the meat contains enough fat to fry itself. Otherwise, use some kind of cooking oil. I generally go for olive or avocado, but coconut oil can be a good choice as well.

Dice (or use diced or “stir-fry” cuts), then brown. Do as with chicken for pan/oil… just remember to adjust for how lean the meat is.

I don’t recommend mince, but you can try if you feel up to it.

As mentioned above, don’t use this recipe. There’s delicious ways to do egg curry, but this isn’t it.

While the meat is cooking (if using a good non-stick pan) or before (if not, as then you’ll need to stir to keep it from sticking), prepare your spices.

“Curry powder” is actually already a mix of spices, all powered. It’s got turmeric, chili, ginger, cumin, coriander, cardamom, cinnamon, clove, peppers, and various others. In New Zealand it comes in two or three mixes: “supermarket”, which is okay, “english” or “mild”, which is what I use, found at smaller grocers, and “garam masala” or “indian” or “strong”, which is also found at smaller grocers and at asian/indian grocers.

You can make your curry “from first principles” i.e. without using “curry powder” at all, and while that’s a cool project and fun to experiment with, it goes a bit beyond the scope of this recipe.

In any case, you’ll need, at minimum:

and if you can (in decreasing order of necessity):

Then add 1 tablespoon of white vinegar. Stir until you have a coarse sand: granules of spice up to half a cm wide. If you’ve added too much vinegar, that might be a thick paste instead — that’s fine, but is less handleable than the sand. If you’ve added too little, you’ll have a lot of fine powder still — add more in this case.

The reason I prefer to make a coarse sand like that rather than a paste or leaving the powder alone is that it reduces the surface area of the spices when initially cooking them. I’ve found that with a bit of inattention or too harsh a heating profile it’s fairly easy to burn your spices — and then the only thing to do is to throw them away and start over.

Also, a wetter paste will stick to the sides of the small bowl I prepare this sand in, which is harder to spoon/toss out in one go.

Making a coarse sand means the spices are slightly less well fried, but it makes the critical part of the recipe much easier to handle.

Get about a teaspoon of cumin seeds and three cloves.

If you have them / feel like it, add a 3–5cm piece of cinnamon, and slice off a little of the ginger.

When the meat is done, take it out of the pan, leaving the fat. Place it on a plate and cover it.

Toss the whole/pieces spice mix in, trying for an even distribution instead of a big clump. Don’t stir: the spices will stick to your spoon instead of staying where they should.

Leave to fry for about 30s to a minute. The spices shouldn’t get burned. You should be able to smell the cloves or the cinnamon wafting from the pan.

Then add the spice sand/paste. Leave for five seconds, then stir; try to spread them out as with the previous mix. The spices should soak up the remaining fat. If you’re using a non-stick pan, you can leave them to fry for longer, but aim for about 30s.

During that time, fill up the small bowl you’ve used to mix the main body of spices with about a third of a cup of water. The small bowls I use hold pretty much exactly that, but that may not be your case.

Then fill up a glass full of water.

(If you want and have some, you can add to it a cube of chicken/veggie stock.)

When the 30s from cooking the main spices are done, pour the small bowl over. The water should immediately start to boil. Leave for about 30s, or just before the water is all gone (don’t let it boil dry!).

Then add the glass of water.

Then add the meat.

Then add more water until the meat is almost covered. Or, if it’s already covered, add another glass of water.

(This says “extra” but that does not mean this is optional. A curry with just meat and sauce is… not great. It can work if that’s all you have.)

Now’s the time to prepare whatever other veggies you have. It needs to be something that cooks moderately quickly. E.g. bell peppers, silverbeet (stalks separated from leaves — the stalks take longer), eggplant, tomatoes, etc.

The last curry I made had two bell peppers (yellow and red), and 6 silverbeet.

Clean them, chop them up in small pieces.

Add in order of how long it takes to cook, leaving a minute or two between each, and stirring after each.

For that curry I added the silverbeet stalks, then the peppers, then the leaves.

If you have yogurt, plain yogurt (greek-style yogurt works), add about half a cup in a circle over the curry. It will cook and the simmering will gradually mix it into the dish. 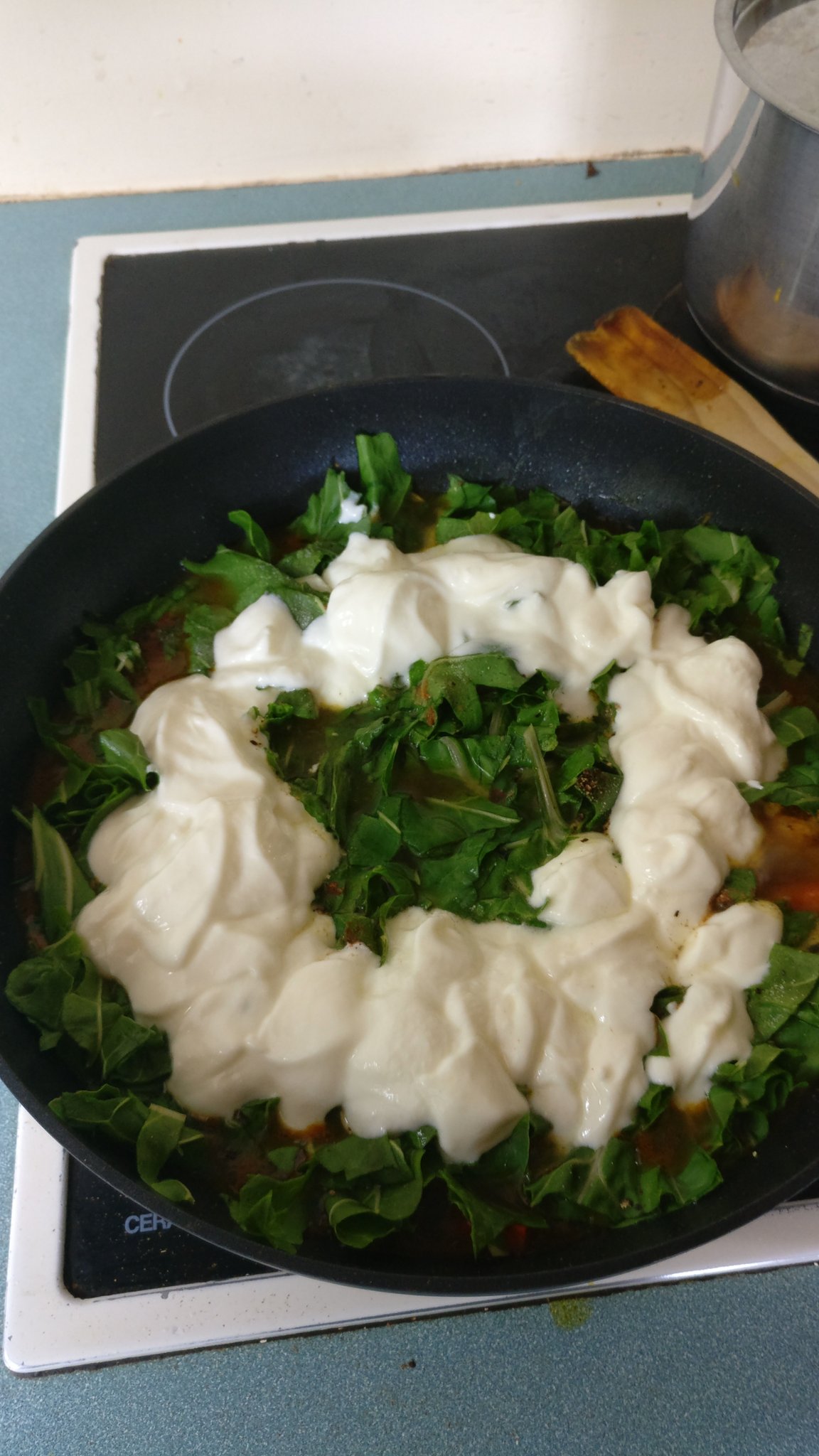 If needed, add water to ensure the curry doesn’t run out. If you want a thicker style of curry, you can omit that, but you’ll have to make sure to watch over the curry and stir occasionally so it doesn’t burn.

If you have those extra spice powders mentioned above (cinnamon, ginger) or others, add some on top. This is for late accents, so more than a pinch and less than half a teaspoon.

Cover, reduce heat to minimum, let simmer for 10 minutes or until you’re ready to eat.

About ten minutes (or as needed by your method) before serving, prepare rice.

How to go faster

The entire thing as described takes me about 45 minutes. But you can cut down that time in various ways!

With all that, mixed-and-matched based on what you feel like or have already, you can throw something together in 10 minutes, and let cook for 15–20. Don’t forget making rice! (Or farfalle pasta, or semolina…)